Major Pests and diseases of groundnuts and their control measures 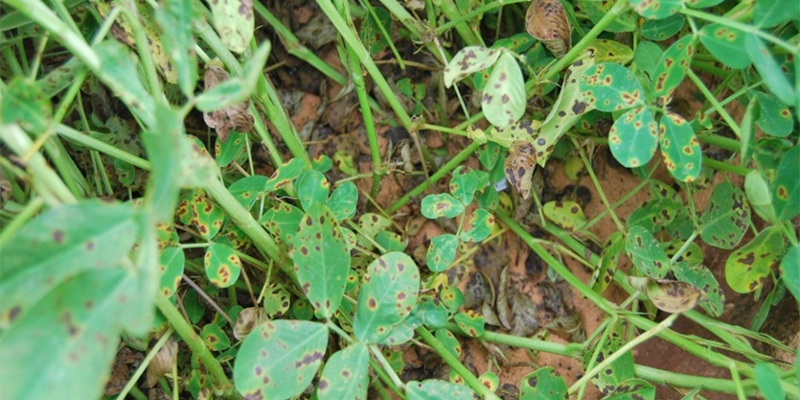 Major Pests and diseases of groundnuts and their control measures

Groundnuts are exposed to pests and diseases that reduce yield and quality and increase the cost of
production wherever the crop is grown.

Major Diseases of Groundnuts.
A large number of fungal, viral, nematode and bacterial diseases have been reported on groundnuts,
most of which are widespread, but only a few of them are economically important on a regional basis.
Major diseases in this region include groundnut rosette, early leaf spot (C. arachidicola), late leaf spot
(Phaeoisariopis personata), Rusts (Puccinia arachidis) and aflatoxin (caused by Aspergillus niger, Aspergillus
flavus)

Groundnut rosette disease
Groundnut rosette disease is a very serious viral disease of groundnuts widespread in sub-Saharan Africa and its off-shore islands (Waliyar et al., 2007). It is the major disease of groundnut in Uganda. It is transmitted by aphids feeding on the crop. There are two types of symptom seen in the crops: green and yellow or (chlorotic). The plants affected by this disease look stunted and presents a bushy appearance. There is a marked reduction in the size of the leaflets and mottling becomes visible (Fig. 14). Yellow (chlorotic) rosette symptoms initially develop a faint mottling on young leaves (Fig 15). Subsequently, leaflets are yellow with green veins. Plants infected when young produce progressively smaller distorted, curled and yellow leaflets. When older plants are infected the symptoms are generally restricted to a few branches or the apical portion of the plant. Green rosette disease shows middle mottling on young leaflets with some leaf curling, but leaves are not distorted. Plants infected when young are severely stunted and dark green in colour. Total yield losses have been reported in susceptible varieties. Uganda has 3 known hotspots (at NaSARRI Serere, Nakabango in Jinja and Ikiiki in Budaka) where disease appears as early as 2 weeks post emergence. Early infected plants produce no yield and there is no control once a plant is infected. A 100% loss in pod yield due to either chlorotic or green rosette disease may result if infection occurs before flowering. Control of aphids will prevent further spread of the disease.

Early and late leaf spots
Early leaf spot (Cercospora. arachidicola) and late leaf spot (Phaeoisariopsis personatum) are the most damaging diseases of groundnuts worldwide. Besides adversely affecting the yield and quality of pod, they also affect the yield and quality of haulm. Although just one leaf spot pathogen usually predominates in a production region, both leaf spot species are generally found in a single field. Shifts in leaf spot species also have been observed over a period of years. Early leaf spot (Cercospora arachidicola Hori) develops small necrotic flecks, that usually have light to darkbrown centers, and a yellow halo. The spots may range from 1 mm – 10 mm in diameter. Sporulation is on the adaxial (upper) surface of leaflets (Fig. 17). Late leaf spot (Phaeoisariopsis personata (Berk & Curt) develops small necrotic flecks that enlarge and become light to dark brown (Fig. 18). The yellow halo is either absent or less conspicuous in late leaf spot. Sporulation is common on the abaxial (lower) surface of leaves (Fig. 18). Farmers confuse leafspots with harvest indicators making mitigation measures difficult. The disease(s) maybe expressed on both the leaves and stems (Fig.29) and this results in poor crop stand and yields.