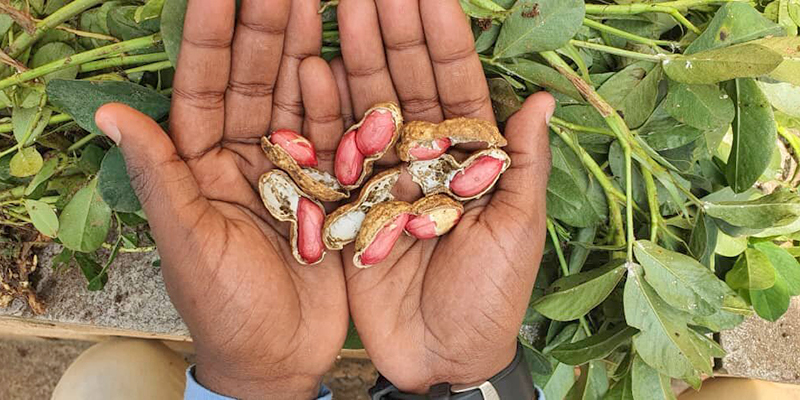 As one of the most important Legumes widely grown and consumed in Uganda, Groundnuts commonly translated in Luganda as Ebinyebwa is Ugandan’s second grown legume after beans in the country.

The plant is unique in that after pollination its flowers bend until the ovary touches the ground where the pod develops.

Key varieties grown in Uganda include Serenut 14R, 13T, 12R, 5R, 4T and Igola grown under moderate rainfall that is well distributed and relatively low altitude below 1500mm. At an optimum temperature of about 270c and 370c

All soils other than the heavy soils are suitable for growing groundnut. The best are however well-drained loamy sandy soils well-drained sandy and sandy loams with a key requirement of adequate levels of phosphorus, potassium, magnesium, and calcium for one to acquire better yields.

Planting ground nuts
Groundnuts should be planted at the onset of the rains.
Sow the seeds at the depth of 5-6cm.
Thairum should be dusted on to the seeds so as they are protected from soil fungi and bacteria.

Fertilizer application;
The most limiting nutrients for groundnuts are phosphorus, potassium, calcium and sulphur.
Calcium is required during pod filling.

Weeding;
weed in the first 3-6 weeks after planting as groundnuts can’t compete with weeds effectively during this period.

Bunchy groundnuts mature after 115-120 days depending on the variety.

Leaves for mature groundnuts turn yellowish and most will drop off.

A summary on ground nuts growing in Uganda

Groundnut growing was introduced to East Africa by Portuguese explorers in the 19th Century. The crop started being grown in the Eastern Region after 1930s.